I've previously discussed the central limit theorem and Wald theory as methods for giving intervals for parameters - in the simple case of identical, independent at-bats, with probability $\theta$ of getting a hit, both give the same result, which is

though for more complicated problems, the two methods may not necessarily give the same result.

Those aren't the only methods for deriving confidence intervals for a batting average. In this post I'm going to derive another type of interval based, again, on the likelihood function, but using it in a different fashion than before.

All the code used to generate the images in this post may be found on my github.


Statistical theory says that, in the case of a simple one-parameter model, a function of the ratios of the likelihoods (specifically, the maximum likelihood estimator $\hat{\theta}$ and another value $\theta_0$) follows a certain distribution:

Which was maximized at the maximum likelihood estimator 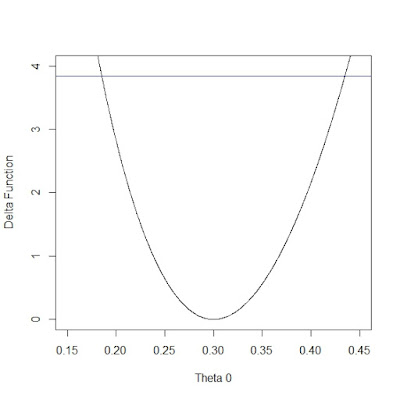 
Unlike the Wald theory and CLT-based interval, this interval is not dependent on any sort of asymptotic normality - and so can be used for small sample sizes. In fact, if you use it for $1$ hit in $n = 3$ at-bats, you get a graph of the delta function that looks like 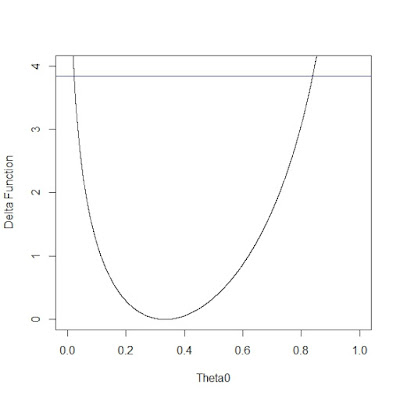 What the interval does depend on, however, is curvature of the likelihood function at the maximum likelihood estimator $\hat{\theta}$. This is easy to check in one-dimensional cases, but not as easy when the dimensionality of the problem grows.

Another advantage is that the likelihood-based interval is invariant to transformation - that is to say, if you used this method to obtain an interval for a batter's odds of getting a hit, and transformed it back onto the average scale, you would get the same interval as if you had originally done it on the average scale. This is not true for the Wald/CLT intervals.
Posted by rcfoster at 11:58 AM