These are my estimated stabilization points for the 2021 MLB season, once again using the maximum likelihood method on the totals that I used for previous years. This method is explained in my articles  Estimating Theoretical Stabilization Points and WHIP Stabilization by the Gamma-Poisson Model.

However, good news! In the past two years, I've had some research on reliability for non-normal data corrected, expanded upon, and published in academic journals. I can definitively say that my maximum likelihood estimator is accurately estimating the reliability of these statistics exactly the same as Cronbach's alpha or KR-20 and performs as well or better than Cronbach's alpha, assuming the model is correct, which - while no model is correct - I believe is very accurate. The article can be found here (for the preprint, click here). I also published a paper with some KR-20 and KR-21 reliability estimators specifically for exponential family distributions such as binomial, Poisson, etc. The article can be found here (for the preprint, click here). These estimators are a little more efficient for small sample sizes but for large sample sizes such as in this case, however, the estimators should be nearly identical.

As usual, all data and code I used for this post can be found on my github. I make no claims about the stability, efficiency, or optimality of my code.

The cutoff values I picked were the minimum number of events (PA, AB, TBF, BIP, etc. - the denominators in the formulas) in order to be considered for a year. These cutoff values, and the choice of 6 years worth of data (2015-20120), were picked fairly arbitrarily - I tried to go with what was reasonable (based on seeing what others were doing and my own knowledge of baseball) and what seemed to work well in practice.

In general, a larger stabilization point will be due to a decreased spread of talent levels - as talent levels get closer together, more extreme stats become less and less likely, and will be shrunk harder towards the mean. Consequently, it takes more observations to know that a player's high or low stats (relative to the rest of the league) are real and not just a fluke of randomness. Similarly, smaller stabilization points will point towards an increase in the spread of talent levels.

Most are the same, but the HR/FB stabilization point has shifted up dramatically given its standard error, indicating a likely change in true talent level and not just sample-to-sample and year-to-year variation. This indicates that the distribution of HR/FB talent levels is clustering around its mean, possibly indicating a change in approach by pitchers or batters over the past two years. The mean has also shifted up over the previous calculation. Similarly, the HR rate stabilization point and mean have increased. Conversely, the strikeout rate stabilization rate has decreased, indicating less clustering of talent levels around the mean, and the mean has also increased.

Aside from the obvious use of knowing approximately when results are half due to luck and half  skill, these stabilization points (along with league means) can be used to provide very basic confidence intervals and prediction intervals for estimates that have been shrunk towards the population mean, as demonstrated in my article From Stabilization to Interval Estimation.

For example, suppose that in the first half, a player has an on-base percentage of 0.380 in 300 plate appearances, corresponding to 114 on-base events. A 95% confidence interval using my empirical Bayesian techniques (based on a normal-normal model) is

That is, we believe the player's true on-base percentage to be between 0.317 and 0.392 with 95% confidence. I used a normal distribution for talent levels with a normal approximation to the binomial for the distribution of observed OBP, but that is not the only possible choice - it just resulted in the simplest formulas for the intervals.

Suppose that the player will get an additional $\tilde{n} = 250$ PA in the second half of the season. A 95% prediction interval for his OBP over those PA is given by

That is, 95% of the time the player's OBP over the 250 PA in the second half of the season should be between 0.285 and 0.424. These intervals are overly optimistic and "dumb" in that they take only the league mean and variance and the player's own statistics into account, representing an advantage only over 95% "unshrunk" intervals, but when I tested them in my article "From Stabilization to Interval Estimation," they worked well for prediction. 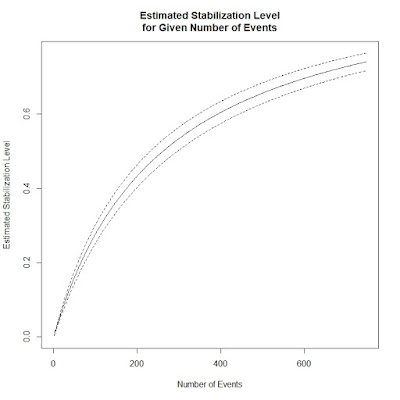 which is obtained from the applying the delta method to the function $p(\hat{M}) = n/(n + \hat{M})$. Note that the mean and prediction intervals I gave do not take $SE(\hat{M})$ into account (ignoring the uncertainty surrounding the correct shrinkage amount, which is indicated by the confidence bounds above), but this is not a huge problem - if you don't believe me, plug slightly different values of $M$ into the formulas yourself and see that the resulting intervals do not change much.

As always, feel free to post any comments or suggestions.