Using the beta-binomial model (notated BB) or the gamma-Poisson model (notated GP, and in this post what I call M is what in the previous post I called K - the variance parameter of the population talent distribution), I calculated the stabilization point for some more pitching statistics. I don't think the model(s) fit perfectly to the data, but they provide a good approximation that generally matches up with results I've seen elsewhere on the web.

Data was acquired from fangraphs.com. I only considered starting pitchers from 2009 - 2014, splitting the same pitcher between years, and did not adjust the data in any way.

All the data and code I used here may be found on my github. I make no claims to efficiency or ease of use.

The "cutoff value" is the minimum number of the denominator (IP, TBF, BIP, etc.) in a year in order to be included in the data set. These numbers were chosen somewhat arbitrarily, and for some of my statistics, changing the cutoff value will change the stabilization point. I'm not sure which statistics this will happen to - I know WHIP for sure, and I suspect ER as well, whereas I think BABIP doesn't exhibit this tendency. It's a function of the change (or lack thereof) in population variance of talent levels as the cutoff value increases - if somebody wants to take a look at it, it would be neat.

I wanted have a little fun and apply the model to stats where it clearly is silly to do so, such as win rate (I defined as wins per game started) and extra batters faced per inning (the total number of additional batters a pitcher faced beyond what is required by their IP). The model still produces estimates, but of course, but bad data fed into a good model doesn't magically produce good analysis.

* I'm not exactly sure what combinations of statistics fangraphs is using for the denominator of their BABIP - it's not BIP = GB + FB + LD. I know the numerator of H - HR is correct, but the denominator was usually smaller , though sometimes larger, than BIP. I solved for what fangraphs was using and used that in my calculations - if somebody wants to let me know exactly what they're using for n, please do.

$\hat{M}$ is the estimated variance parameter of the underlying talent distribution. Under the model, it is equal to the number of plate appearances at which there is 50% shrinkage.

$SE(\hat{M})$ is the standard error of the estimate $\hat{M}$. It is on the same scale as the divisor in the formula.

The 95% CI is calculated as

It represents a 95% confidence interval for the number of plate appearances at which there is 50% shrinkage.

For an arbitrary stabilization level $p$, the number of required plate appearances can be estimated as

Since the denominators are so different (as opposed to offensive statistics where PA was used for almost everything except for batting average, and AB are fairly close to PA), I don't feel as comfortable putting everything on the same plot. That being said, the stats that use TBF look like 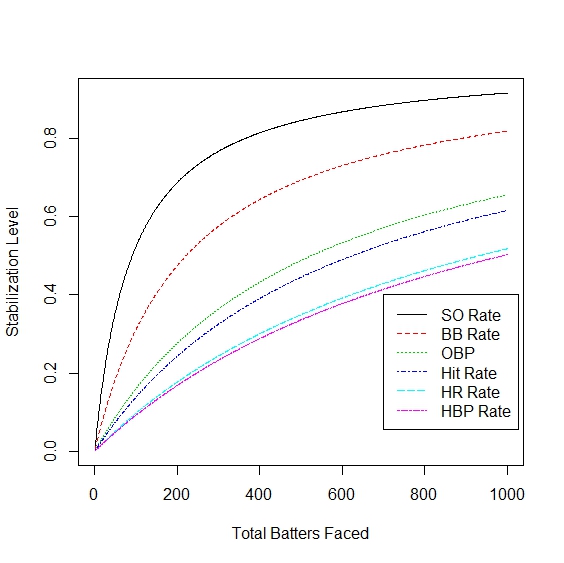 And the stats that use BIP for their denominator look like 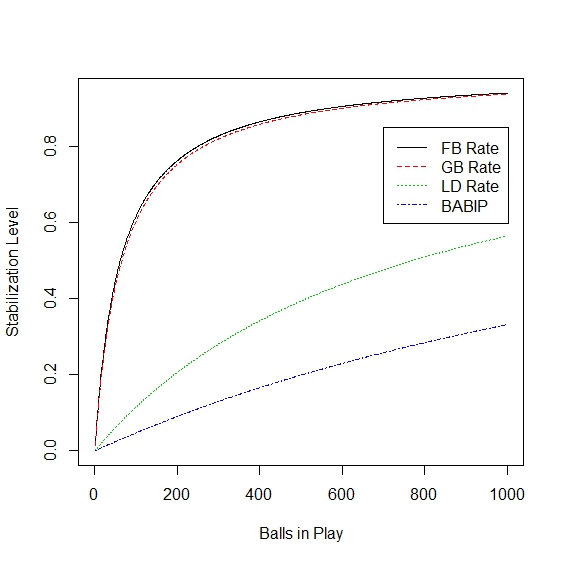 As always, comments are appreciated.