Using the same method from my previous post, I calculated some stabilization points for more offensive statistics.

All of the code and data I used may be found on my github.

For each, I used a binomial distribution for the result of the at-bat/plate appearance and a beta distribution for the distribution of talent levels. I think a different model might work better for some of these statistics (and I'll have to work through the poisson-gamma anyway when I look at pitching statistics), but this represents a decent approximation.

As I stated in a previous post, statistics that can not be constructed as a binomial event (such as wOBA) do not fall under the framework I am using, and so I have not included them in estimation. I could treat them as binomial events, fit a model, and perform estimation procedure, but I would have no idea if the results are correct or not.

All estimated stabilization points were calculated using unadjusted data from fangraphs.com for hitters from 2009-2014 with at least 300 PA, excluding pitchers.

$\hat{M}$ is the estimated variance parameter of the underlying talent distribution. Under the model, it is equal to the number of plate appearances at which there is 50% shrinkage.

$SE(\hat{M})$ is the standard error of the estimate $\hat{M}$. It is on the same scale as the divisor in the formula - so PA for all except batting average and walk rate.

The 95% CI is calculated as

It represents a 95% confidence interval for the number of plate appearances at which there is 50% shrinkage.

For an arbitrary stabilization level $p$, the number of required plate appearances can be estimated as

Without confidence bounds, a plot of the sample size required for various stabilization levels is 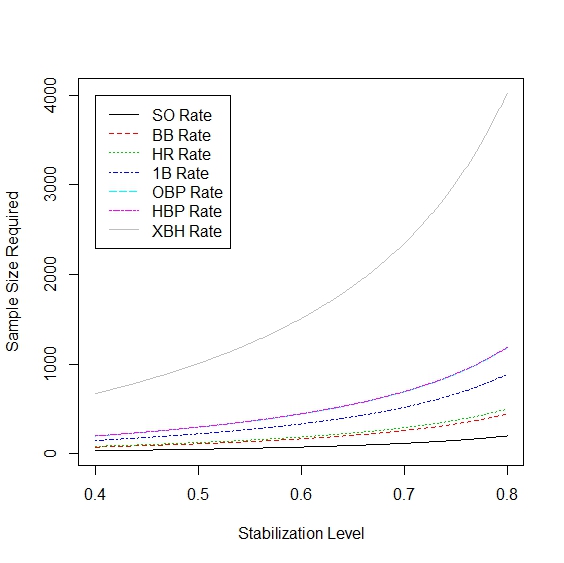 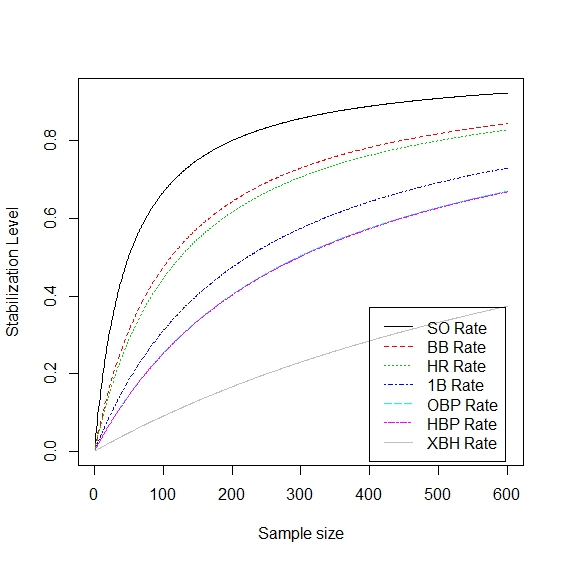 This looks very similar to other plots I have seen.

Comments are appreciated. Also, I'm currently in the process of learning ggplot, so hopefully my graphics won't be as awful in the near future.
Posted by rcfoster at 9:48 AM